NEITHER HERE NOR THERE

A Memoir of Subtopia 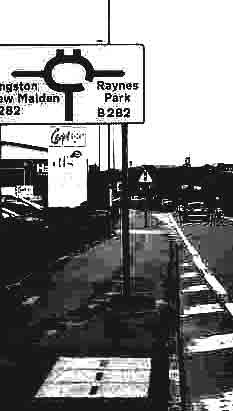 In those far-off days I was living on the outskirts of South West London, in what may be defined as a kind of ‘Subtopian Landscape’. West Barnes, Motspur Park and the immediate locality (bounded to the west by Beverley Brook and The A3 Kingston Bypass; to the north by South Western main line), seemed a kind of in-between place, neither here nor there. Shannon Corner (before the flyover), with its Art Deco Odeon (Saturday Morning Pictures for local kids) functioned as a dramatic intersection and quasi-industrial focus for perturbation and random incongruities.

These are my ‘missing years’; the years when I did not know how to relate to others, years when the mundane routines and distractions of family life took priority. But my inner, subjective existence was very different.

I ‘escaped’ into all types of paraxial if solipsistic fantasies, often inspired by Hollywood – or magazines devoted to horror and science fiction films. I might dream about Natalie Wood in Gypsy. I might daydream about Ursula Andress as Honey Ryder, or I might fantasize about the sinister but doomed Sylvia Lopez as Queen Omphale in Hercules Unchained. Any one of them might be a facet of my Dark Anima, the prototype for which was a macabre photo I found in a book of the dancer Mona Inglesby in The Masque of Comus.

Yet the epicentre of my little world was, perhaps, the West Barnes Lane level crossing or, possibly, the Carter Bridge signal box on the Raynes Park to Motspur Park line (Dorking Branch) where on my way to and from school, I used to cross the tracks to reach the junction of Barnscroft and Westway Close, next to the Alliance Sports Ground.

At the eastern edge of my private domain, my very own terrain vague, was Cannon Hill Common, a historic site associated (we liked to think) with stories of Roundheads and Cavaliers, while to the south was the quite remote destination of Motspur Park, itself bisected by the further reaches of the Brook. I tended to think, in an imprecise way, of this entire area as ‘West Barnes’. This imprecision was further compounded by a lack of official clarity: one thought of ‘living in Raynes Park’ due the proximity of the station, shops and the Rialto cinema, yet the postal address was ‘New Malden, Surrey’. On the other hand West Barnes/Motspur Park sat on a boundary between Kingston and Merton and the entire area, known until 1965 as the Merton and Morden Urban District, was obviously part of the Greater London ‘urban fringe’ where those ubiquitous red trolleybuses ran between the Fulwell Depot and Wimbledon Town Hall until as recently as 1962.

This ‘urban fringe’, this indeterminate zone of playing fields, commons, sports grounds, putting greens, rarely-used tennis courts, branch lines, risky level crossings, traffic roundabouts, empty car parks, allotments and bypass embankments; with its numerous notice boards and hoardings; with its wire fences, rows of respectable semis built in the 1930s; blocks of flats and various light industrial ‘works’ (Shannon Typewriter, Venner, Decca, Bradbury & Wilkinson, Champion Timber ) might have appeared the materialization of a kind of cultural void. To the critical observer it was an anonymous tract of anomic space lacking in distinctive character or ‘spirit of place, an interstitial ‘middle state neither town nor country’. In hindsight it seems that this ‘Subtopia’ was an incitement for the imagination; although it might also have been that the bizarre strangeness I experienced in solitary moments was not a subjective projection but more an act of discovery.

Subtopia is bizarre in itself. Most streets were named as ‘something Avenue’, or ‘so-and-so Drive’, or ‘whatnot Lane’. Some streets were called ‘Greenway’, ‘Linkway’, ‘Kingsway’ or ‘Crossways’. There were also streets with feminine names, like ‘Estella Avenue’, and there were similar ‘Avenues’ called Phyllis, Adela or Marina. There were a couple of Avenues with boy’s names like Douglas or Arthur, but I didn’t like those. Estella and Marina sounded like giggling harem girls – I visualized them clad in diaphanous veils, decked out in tinkling bracelets and chandelier earrings – ‘cheesecake’ extras in down-market Hollywood epics or even those imported Italian ‘neo-mythological’ sword-and-sandal ‘peplum’ films. These streets were deserted during the day and there were very few cars parked by the side of the road. Occasionally a little boy or girl (not at school?) might whizz by on a bike.

As I recall, the nearby Bushy Road bypass embankment was a mixture of scrub and uneven terrain, ideal for gangs of local kids to build ‘dens’ and play around with bows and arrows. There were sandy track-ways and a steep flight of concrete steps lined with poisonous laburnum; there were metal milk crates hidden in the grass and there were treacherous patches of nettles. On this inclined embankment strange finds were made, such as discarded scaffolding poles or stacks of old newspapers and sleazy magazines (Tit-Bits, Parade, Reveille, Famous Monsters of Filmland, The Sunday People). It was noticeable that many of these disreputable publications were mutilated with numerous rips, tears, and missing pictures. In the forbidden pages of Reveille and Parade I found further inspiration for my fantasies. In my imagination famous stars like Natalie and Ursula, now competed with pin-ups known only as Donna, Vicky, Debbie or Carla. On one occasion we uncovered a cache of old 78 shellac records mostly smashed and covered in mud. One disc remained intact: ‘Lawdy Miss Clawdy’ by Elvis Presley.

The nearest recreation ground, just on the other side of the branch line, was guarded by rows of very tall poplar trees. During hot heat-haze summers, around the nearby roads, there was often the smell of melting tarmac. Local allotments were littered with shards of broken terra-cotta flower pots and small plastic windmills. Here, neat grass pathways zigzaged between tall rows of runner beans and bundles of canes. During winter snow covered the Trial Grounds of Carter’s Tested Seeds and gathered on the neo-classical semi-naked statue of Venus that graced the large, round fishpond at the driveway entrance to this imposing building dominating the area just north of the concrete road bridge with its dual carriageway. That elegant, dignified statue of Venus, with her fully-exposed, marble-white bottom, was, ‘for all the wrong reasons’, something of an attraction for many local boys, myself included. 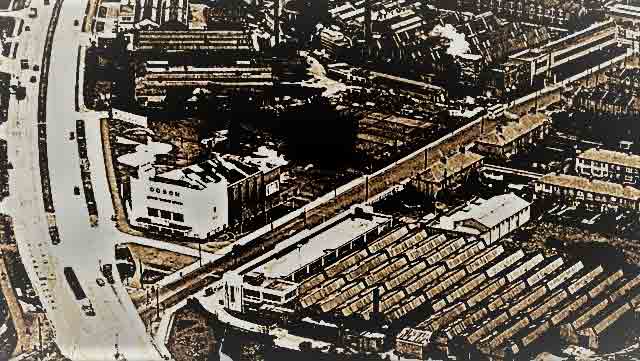 ‘Subtopia’ (‘inferior place’ from the Greek word topos) was a technical term originated by Angry Young Architect, critic and campaigner Ian Nairn in a special edition of the Architectural Revue entitled Outrage: On the Disfigurement of Town and Countryside (1955) and later in the book Counter Attack Against Subtopia (1957).

Nairn deplored the disfiguring, environmental blight of the semi-urban, quasi-suburban ‘desert’ of ‘wire, concrete roads, cozy plots and bungalows…a universal Subtopia, a mean and middle state…’ Certainly not as sinister as ‘The Wasteland’, this kind of place was simply bland and uninteresting. Lacking the seedy appeal of the inner city or the glitz and prestige of The West End, Subtopia was the epitome of postwar banality, the result of lazy town planning or the outcome of a kind of apathy where construction rules, culture and taste evaporated into vague, misty indifference. Concerns for important social issues withered away in Subtopia, a realm whose inhabitants appeared to live a charmed life, subsisting in a kind of lower middleclass coma. Even a performance by Bill Haley & His Comets on stage at the Shannon Corner Odeon failed to create more than a minor scandal: ‘Cinema Seats Ripped Up By Thugs!’ a local paper huffed. The event was soon forgotten.

Was my Subtopia more genteel than that derided by Nairn and the conservationists?

Girl-friends, some from school were never far away: there was Lesley (a keen ice skater) who lived in a nice house over by the Common with its wooded copses and green swards and a football pitch. Or there was perky Babs (brother with an elaborate model railway) who lived on the quiet road called Linkway. Before Babs there was a mischievous little lady known as Pinky who lived in our flats. On school holidays I used to visit the recreation ground with Lesley, who showed me her lace-trimmed knickers one idyllic afternoon. We would sit and watch the distant main road traffic… or drift through wooded walks in an immersive frame of mind that cannot be recreated from this distant perspective.

According to Bob Kindred of the Association of Conservation Officers, Nairn’s campaign of outrage, his crotchety ‘counter attack’ against Subtopian blight was aimed at such horrors as: concrete lamp standards, ‘Keep Left’ signs, municipal rockeries, chain link fencing, truncated trees, ‘garish’ shop-fronts, ‘pretentious and intrusive’ outdoor advertising hoardings, wires, poles, and ill-sited public utilities. ‘Many of these targets seem eerily familiar but the indignation now seems lacking‘, bemoaned Bob writing in the 1980s. ‘Has familiarity blunted our ability to see how tawdry many of our surroundings still are?’

But then, perhaps for some of us, nostalgia has superseded indignation.

Tweet
This entry was posted on 22 August, 2020 in homepage and tagged A.C.Evans. Bookmark the permalink.