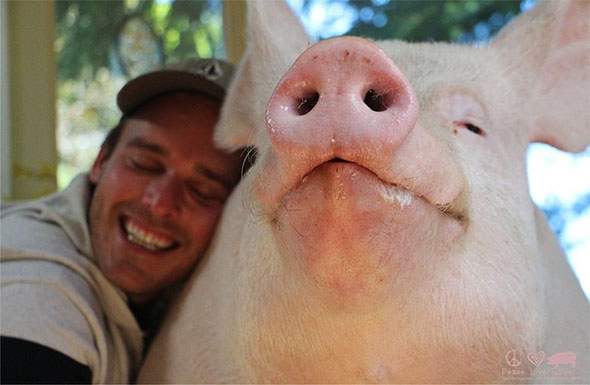 With the spike in veganism, the local butcher rebranded his business as a pet shop, selling pigs, sheep, and chickens to the lonely unemployed who missed the rush for dogs. He’d no previous experience, but an animal’s an animal, and at the end of the day it’s as easy to sweep up shit as blood with the sawdust. He didn’t know where to source cages, so he carried on dangling his stock by the ankles in his fly-specked window. Of course, it attracted do-gooders from all over town, but the pigs assured them they were fine, that the tethers were soft and comforting, and that a rush of blood to the head was actually quite a buzz. The sheep agreed and said it could be worse, nodding to the gleaming cleaver in the block behind the counter. The chickens and the butcher smiled, and the do-gooders saw the joke and laughed as they left, more than one of them with a new best friend for life trotting at their heels. In the quiet that followed, the butcher said he never knew that animals could talk. Love discovers truths about individuals that others cannot see, said a pig. You and your Kierkegaard! said a sheep. The butcher looked at the chickens and the chickens looked right back.

Tweet
This entry was posted on 2 April, 2022 in homepage and tagged Oz Hardwick. Bookmark the permalink.