This is All An Illusion 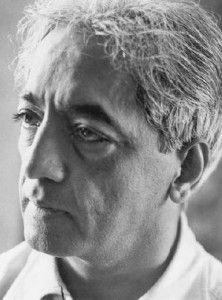 I was in India, by metaphysical coincidence, when I read that Krishnamurti, the Indian thinker, had just died. I wondered if he was nearby somewhere, just lying there, not thinking.

I tried to recall what his thinking had been on the subject of life after death. He was pretty much unconvinced of it, as I remembered. I wondered if he were, round about now, finding out that he’d been terribly wrong.

It’s something that always crosses my mind when someone who had strong convictions about an afterlife dies. What if I, for instance, after a lifetime of loudly scoffing at the idea, were to die and wake up in Heaven? Would I be pissed off?

I once sat very close to Krishnamurti for several hours and suddenly recalled him in vivid detail. A friend had invited me to hear him speak. And very witty he was too, the old thinker, sitting there all in white, under a tree, Buddha-like, small and very graceful, in front of a rapt audience. It was one of those bright blue, flawless California afternoons. We were somewhere in the hills of Ojai, in a shady grove of some kind, olives I think. I found out later that it was here that he died, not in India at all.

Krishnamurti was already very old and frail but still very handsome. He was also very charming and made us all laugh a lot during his sweetly ironic meanderings. But as I watched the old boy, mesmerized as we all were, his words started to become less and less arresting to me as I became increasingly agitated over a question that I was practically bursting to ask him.

“You know, I’m with you on the elusiveness of truth and on humanity’s inescapable dishonesty, but…why the comb-over?”

Well, to be fair, it wasn’t a blatant comb-over. But maybe that’s what got me so worked up about the damned thing, the subtlety of it, its very deniability. See, it could not actually be accused of being a deception, because it was such a confection, a white, silken meringue, a hair-like aura, a Hokusai wave about to crash onto a balding headland. It was a veritable flying buttress of creative combing. Gaudi might have had something like it lying around in a notebook.

So, it could be presented, strictly speaking – legally, as it were – as an actual hair style, not a comb-over at all, per se, qua comb-over. All fine and good. But this was Krishnamurti. Know what I mean? A life lived in a kind of amused pity at human self-delusion doesn’t really accommodate the old comb-over, does it?

Oh, we all know why he went to such an effort, of course, and vanity is not such a bad thing in my book, not at all. It’s always best to look one’s best. A certain amount of vanity is pretty much unavoidable, unless you’re genuinely into blackheads. A bit of vanity in the pursuit of sex, for instance, is pretty much essential, if you want to get any. There’s good cholesterol and there’s bad cholesterol.

Tweet
This entry was posted on 23 March, 2019 in homepage and tagged Alan Platt. Bookmark the permalink.

4 Responses to This is All An Illusion