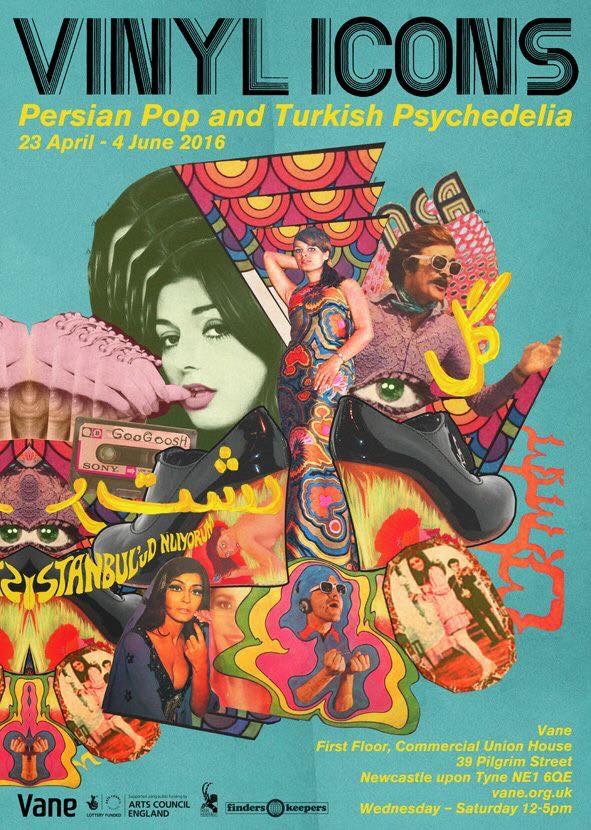 Vane Gallery in Newcastle is currently hosting a marvellous array of Iranian art, collage and representations of kitch and vintage fashion by some of its leading artists. A blast of colour, humour and thought provoking imagery will meet you as you take a cultural dip into Iran’s past. With the saturation of war being the usual and very negative representation of the Middle East in the media, it is refreshing to witness the expressions and thoughts of its real citizens through this post-revolution art, and a very positive and uplifting one it is at that.

There is sadness too, as you realise some of the glamorous film stars in the artist Afsoon’s psychedelic photo montages have ‘disappeared’: political comment and observations of dissent rumble through the deceptively vibrant and light hearted images. Female freedom is a strong message running through the exhibition also, indicating that music, art, fashion and glamour can be universally emancipating.

Although Iran’s past is being fondly and nostalgically celebrated here, there is the exciting prospect that this sparkling exhibition of Iranian fusion psychedelic art and music is a sign of its future. 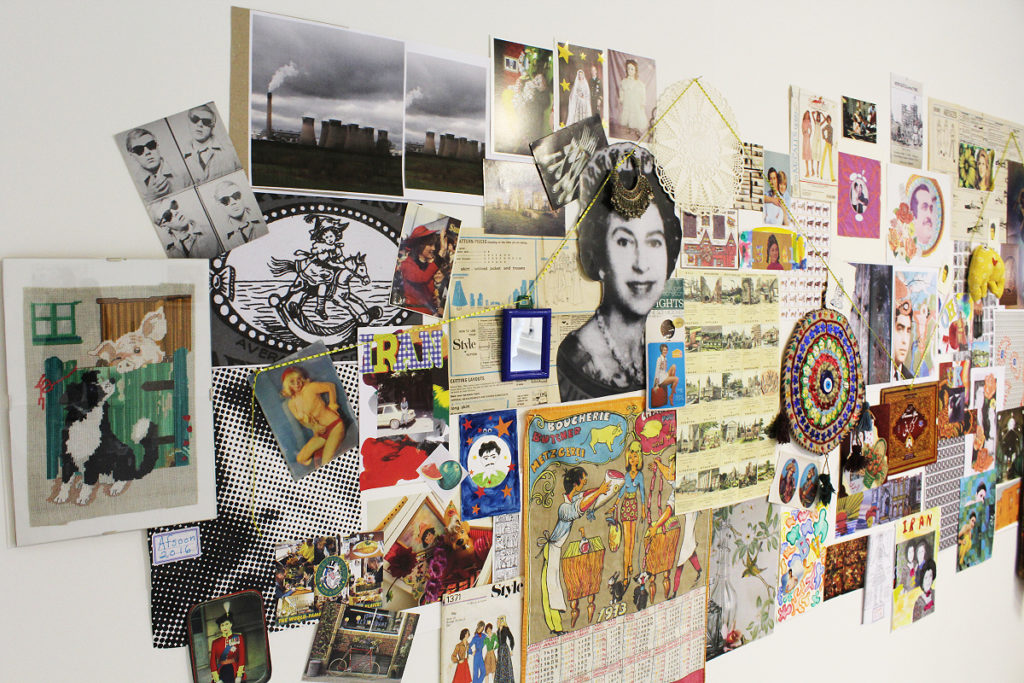 Vane is pleased to announce a major exhibition, ‘Vinyl Icons: Persian Pop and Turkish Psychedelia’, a unique presentation of art inspired by the popular music of pre-revolutionary Iran and Anatolia. Curated by Sara Makari-Aghdam, a young North East England based curator of Azeri-Turk, Persian and English descent, the exhibition makes a clear connection between 1960s and 1970s Iranian popular music and contemporary visual art from the Iranian diaspora. 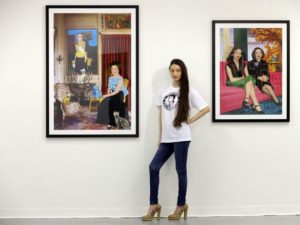 One of Makari-Aghdam’s earliest memories of connecting to her father’s background was discovering his Persian pop cassette tape collection from his youth. Makari-Aghdam’s father left Iran in 1974, five years before the Islamic revolution, to study engineering in the North East of England. For many diaspora migrants these records and tapes represent what life in Iran used to be, a time when modern musicians and artists were freely allowed to express themselves. Today Persian and Turkish pop records of this era, though scarce, have become highly collectable and an inspiration for many artists, as can be seen in the work of the five artists in the exhibition.

Sara Makari-Aghdam was born in Stockton-on-Tees. She studied BA (hons) in History of Modern Art, Design and Film at Northumbria University, Newcastle upon Tyne (2004-07) and Masters in Curating Contemporary Design at Kingston University and the Design Museum, London (2011). While studying for her Masters, Makari-Aghdam was chosen to assist the Victoria & Albert Museum, London, Curator of Contemporary Arab Art and Design, Salma Tuqan, on the Jameel Prize, an international award for contemporary art and design inspired by Islamic tradition. 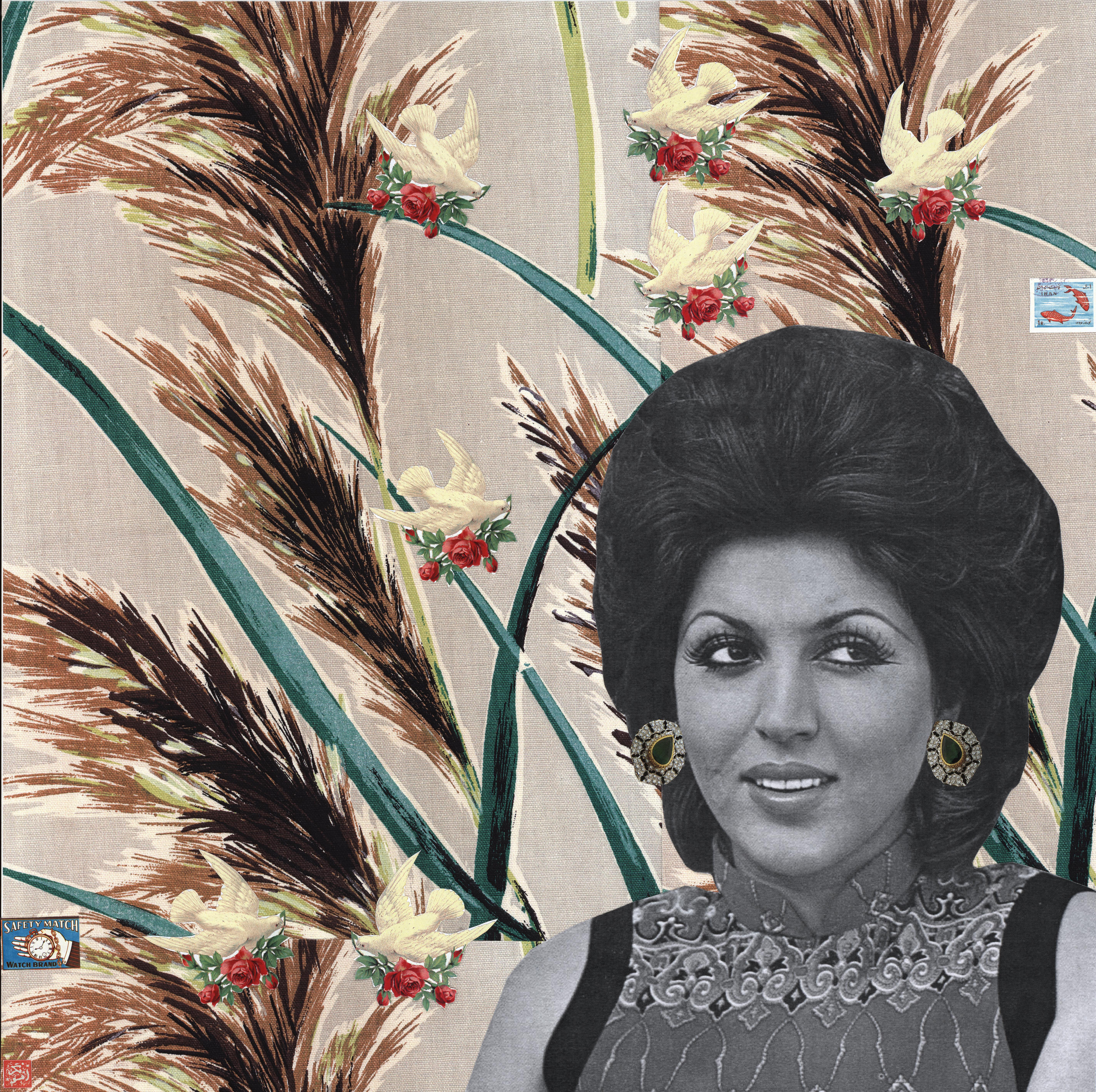 Afsoon’s ‘Fairytale Icons’ photomontages include images of iconic figures from both European and Middle Eastern culture. The artist’s nomadic life is reflected in her work, where East merges with West and the result is at once familiar and foreign, linking the themes of nostalgia and cultural hybridity, rich, yet often playful and humorous. Afsoon was born in Iran and moved to San Francisco, USA, in her late teens. She currently lives in London. 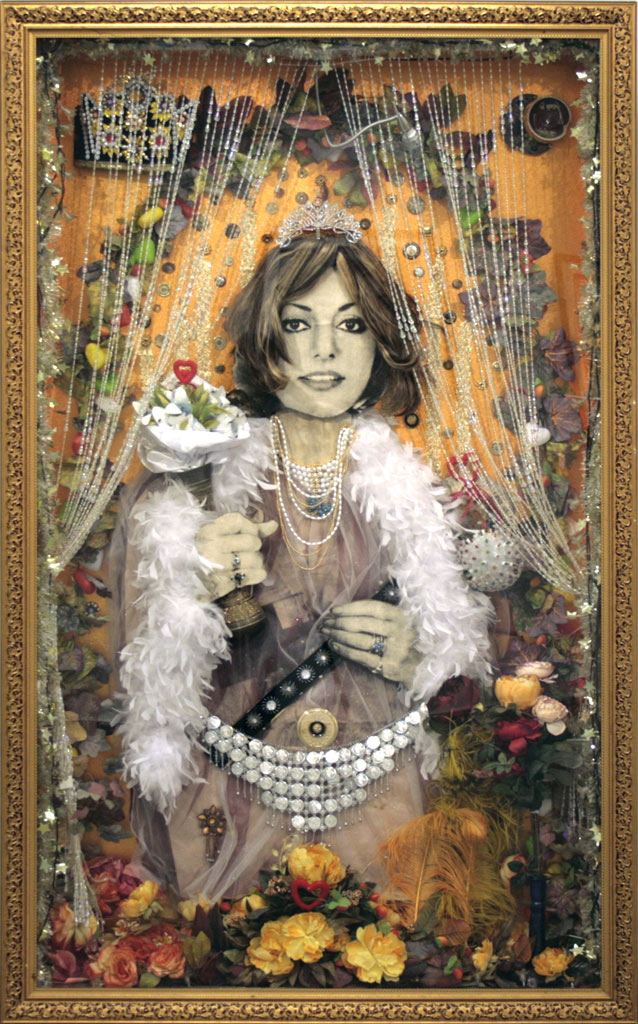 Khosrow Hassanzadeh combines pop art and over-the-top kitsch. The word Javad is used to describe Hassanzadeh’s style; as well as being a male name in the Persian language, it is used to describe an unsophisticated rural person, ‘fresh-off-the-boat’ in a big city. For Iranians this indicates something old-fashioned and laughable. Khosrow Hassanzadeh was born and currently lives in Tehran, Iran, where he works as an actor and visual artist. 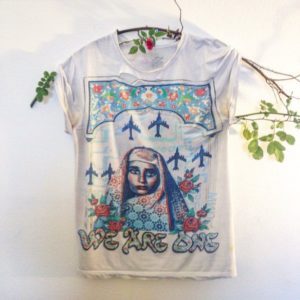 Hushidar Mortezaie has been commissioned to make a hand-painted bespoke gown for the exhibition. The inspiration for his work ranges from the indigenous, nomadic, tribal peoples of Iran and Turkey, to the popular culture of the 1950s-70s – epitomized by the Iranian singer and actress, Googoosh, through to the post-revolutionary culture of the country today. Hushidar Mortezaie was born in Tehran, Iran and works as a designer and artist in New York, USA. 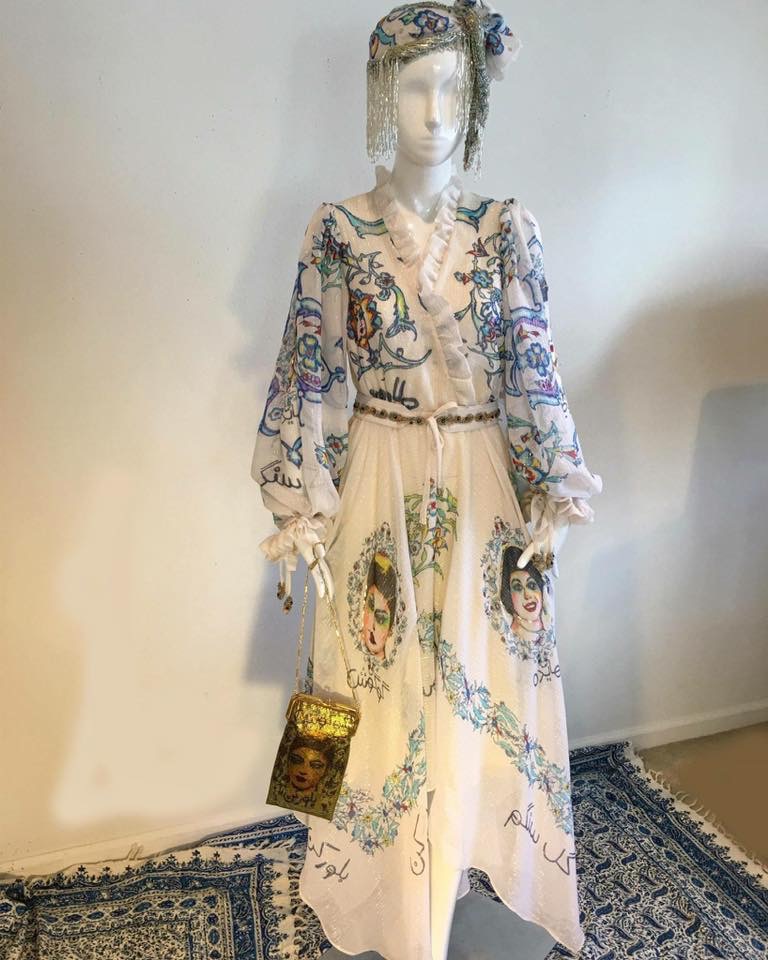 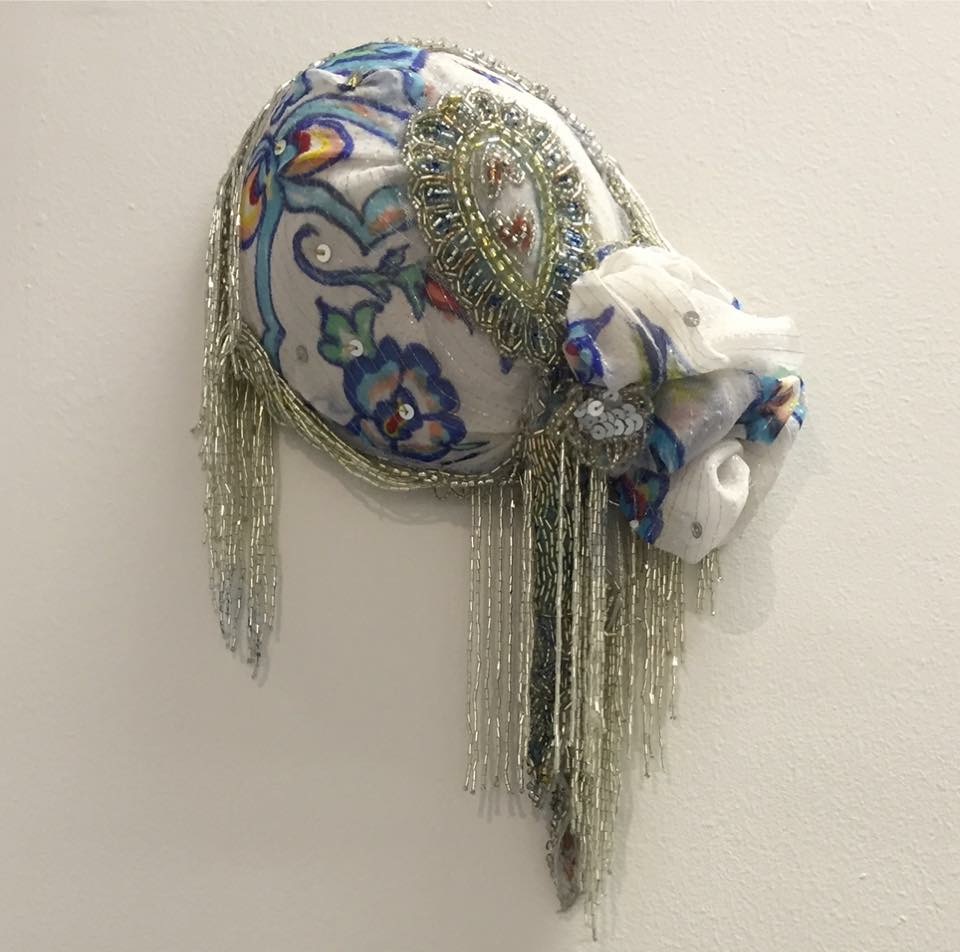 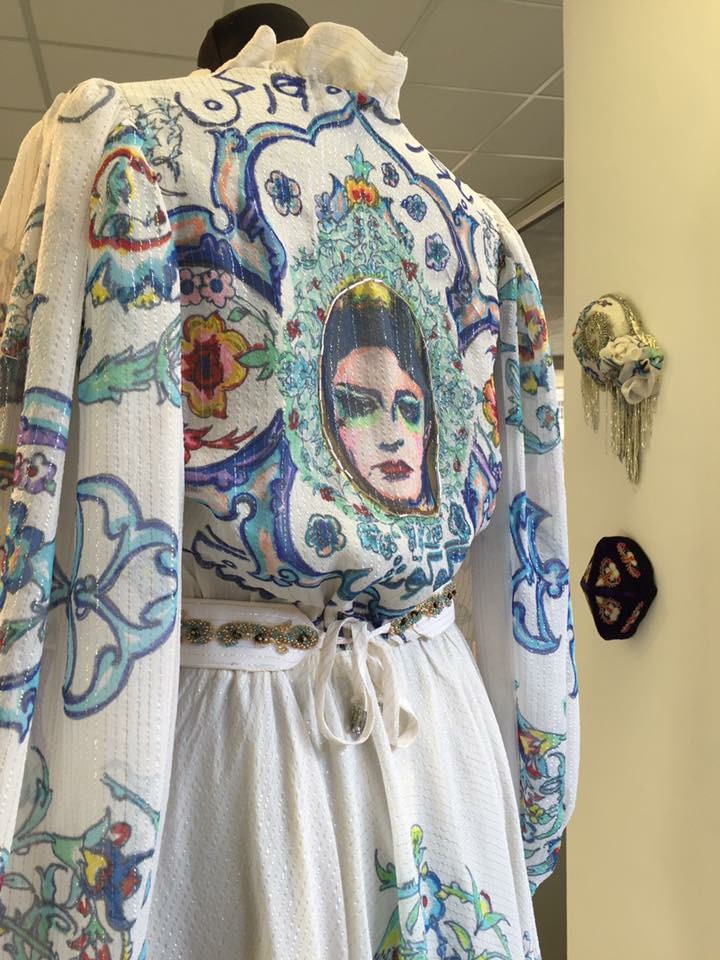 Taravat Talepasand trained in the challenging discipline of Persian miniature painting in Esfahan, Iran. Her egg tempera paintings and works on paper focus on the idea of ‘acceptable’ beauty and its relationship with art history under the guise of traditional Persian painting. She paints a present intrinsically linked to the past, easily understood by Iranians and intriguing for Westerners. Taravat Talepasand was born of Iranian parents in Eugene, USA, and lives in San Francisco, USA. 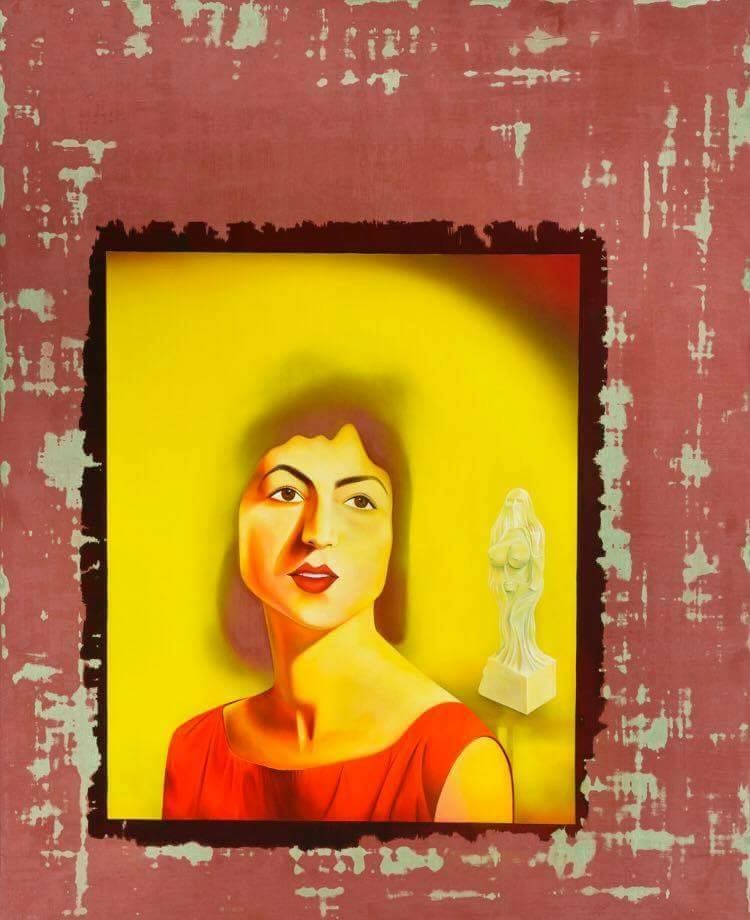 Malekeh Nayiny uses digital photography as a kind of ‘time machine’. Nayiny photographs demolition sites combining them with billboard advertisements, magazine covers, and mass-media images from before the Iranian revolution, as well as constructing collages from old family portraits. These are then digitally manipulated to accentuate a sense of fracture and temporal distance. Malekeh Nayiny was born in Tehran, Iran and she lives in Paris, France. 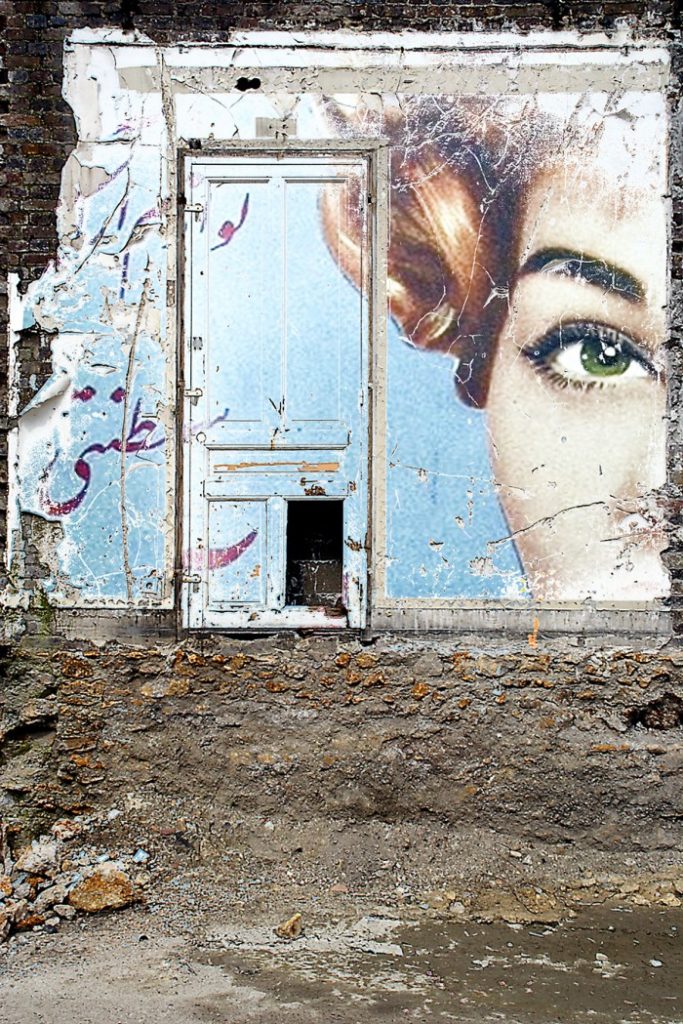 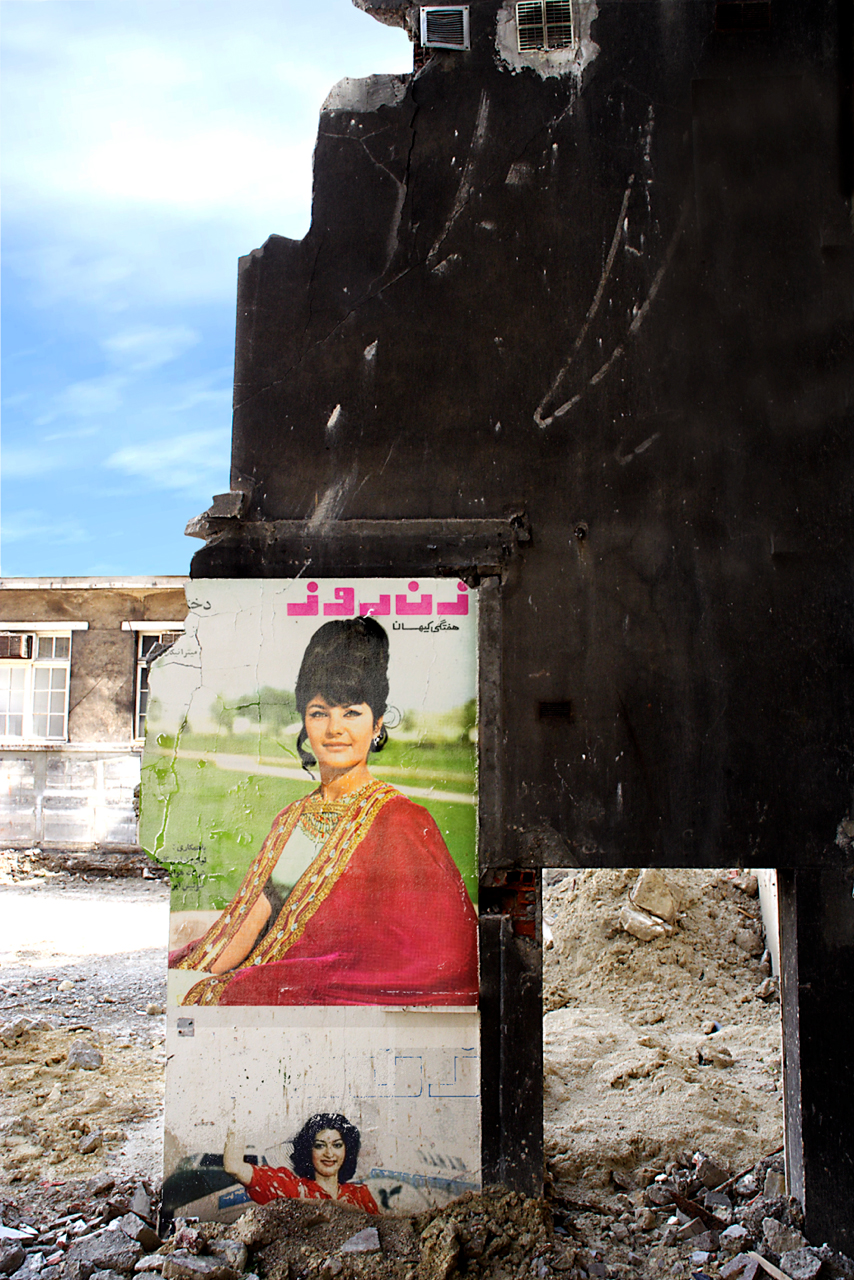 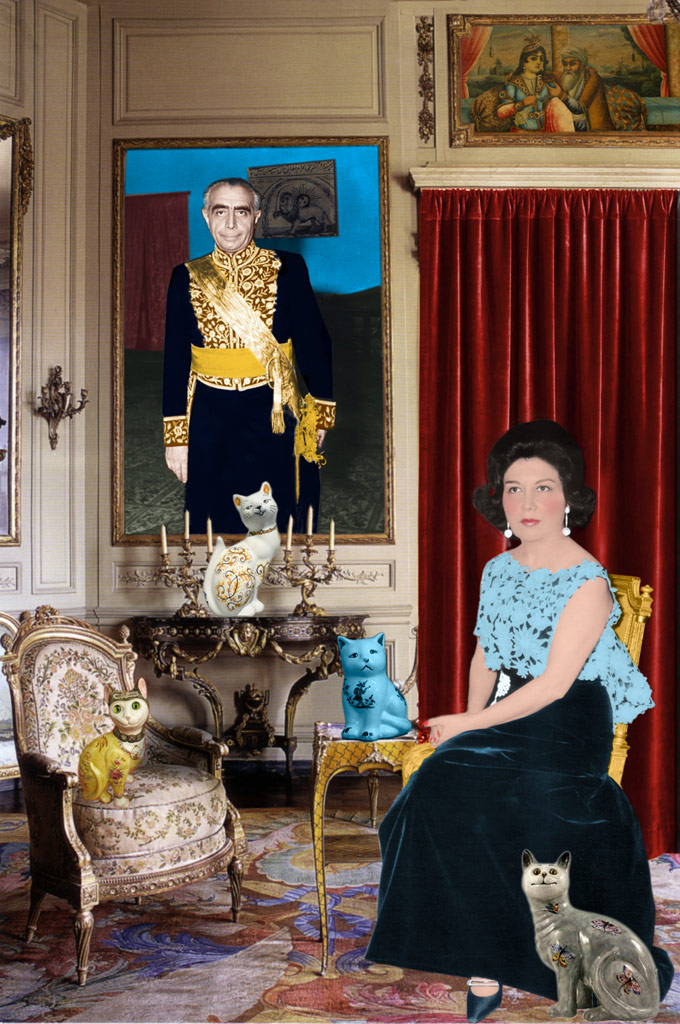 In addition to the artists’ work, there will be a display of record covers and related memorabilia, including 1960s and 1970s furniture and rare vintage fashion. 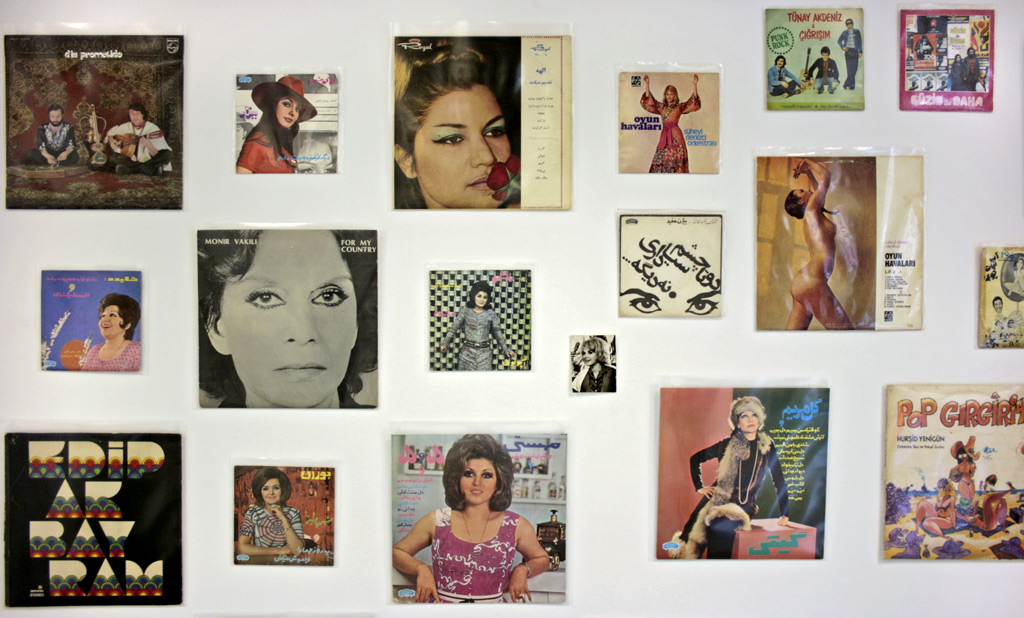 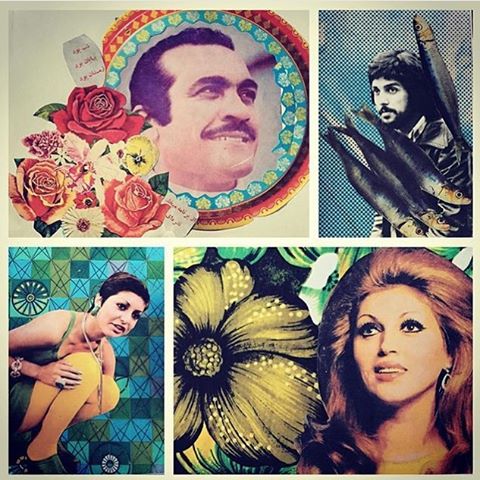